The Understanding of Lightning Discharge Mechanisms 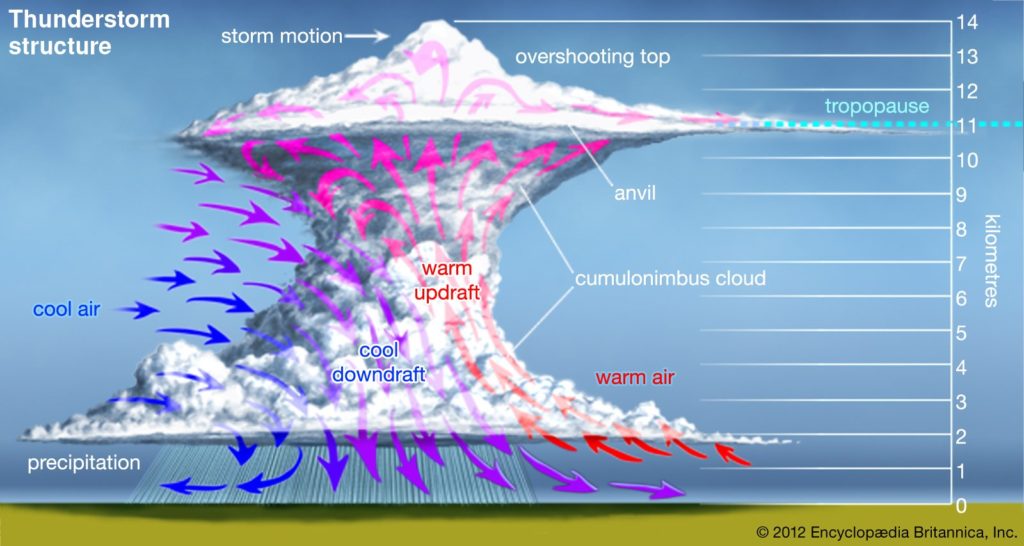 I. Thunderstorms and Lightning

Lightning is the bright flashes of light seen in the sky during thunderstorms. Every day, an average of around 8 million lightning strikes discharges over the earth, which is the equivalent of about 100 lightning bolts that strike the Earth’s surface every second. Indeed, meteorologists may forecast the general conditions that cause lightning, but no one can predict the exact location and time of future lightning strikes. Nevertheless, lightning detection and monitoring are very important to improve public safety, warn of potential wildfires, and protect electrical systems. Fig. 1 shows the world patterns of thunderstorm frequency.

The locations of thunderstorms are of great importance to public safety as it is not only the lightning strike that is dangerous, but many other factors linked to thunderstorms.

Nowadays, several websites provide maps to display the latest strikes recorded around the world as well as the data and strike intensity.

As can be seen from this figure, thunderstorms often occur in tropical locations over land. Usually, these places are characterized by air that is likely to warm up quickly and form a strong upward current.

Thunderstorms often bring a variety of severe weather such as heavy rain, lightning, damaging winds, and, occasionally, tornados. No place outside is safe when storms are in the area, especially because of lightning discharges. Lightning can strike a person, tree, or an object either on the ground or in the air. We’ve covered more useful information, advice, and steps for lightning protection and safety. We strongly recommend you have a look.

Thunderstorms are associated with deep convective clouds, which have a large vertical extent from the boundary layer to the tropopause. They are most often, but not necessarily, accompanied by precipitation at the ground.

II. Formation and Electrification of Thunderclouds

Lightning can be seen as a series of electrical activities in the atmosphere along a channel of high ionic density – a large-scale natural spark discharge with highly conductive plasma channel in the air [1]. A highly intensive electric field is created by the formation and separation of positive and negative electric charges within the atmosphere. Therefore, the primary source of lightning is the thundercloud, which is also termed cumulonimbus [1].

The presence of heat and humidity creates convection movements, stirring of air. Since the warm air is less dense than cold air, it gains altitude and takes the place of cold air, which loses altitude as represented in Fig. 2. It is unfortunate that the exact mechanisms of this large-scale charge separation within the thundercloud as well as the initiation of the discharge itself are still not fully understood [2].

As the warm air rises in altitude, its temperature will drop slightly and the water vapor it contains will condense, forming water droplets or even ice crystals.
The latter will lose altitude, and on its own way create an additional electrical charge by friction [3]. The water vapor in the air condenses further and forms a cloud. Strong vertical air currents carry moisture, fragments of ice, hailstones and water droplets in the cloud. The resulting warming of the air will strengthen the upward movements of the cloud that becomes thicker. Its summit can thus rise gradually until it reaches 8 to 15 km in height [4], becoming a powerful cumulonimbus cloud. These huge sponges are engorged with hundreds of thousands of tons of water in the form of drops and ice crystals that clash strongly against each other. During thunderstorms, the cumulonimbus is strongly electrically charged.
III. Classification of Lightning Discharges

Cumulonimbus is a cloud with an anvil-shaped top and a flat base. Its base width is usually between 500 and 2000 meters, while its summit can reach an altitude of 15,000 meters in less than half an hour [5]. In most cases, the top of the cloud is positively charged while its base is negative as shown in Fig. 3. Whatever the actual explanation, the charge at the top of the cloud, made up mostly of light ice crystals, is overall positive, while that at the base of the cloud, made up of water drops heavier than the ice above, is overall negative.

When the cloud is ripe to burst into a thunderstorm (Fig. 4), it forms a vast dipole creating electric fields between the various interior layers, as well as between its base and the earth’s surface. This has the effect that the earth located under the cloud is electrified by influence in the opposite direction, in accordance with the laws of electrostatics. Its standard is on average from -10 to -15 kV/m approximately. In the vicinity of peaks (steeples, trees, lightning rods, etc.) the field can reach values of around 100 kV/m.

Cloud-earth potential difference, even if it is high, does not directly allow lightning to propagate. There is therefore a progressive ionization of the atmospheric air. Pre-discharges will form in the cloud where the ionized channel will establish a sufficiently conductive bridge, allowing lightning to propagate. As soon as the tip of the tracer approaches the earth, the upward pre-discharges form and join the upward tracer. A connection occurs between them to create the first and subsequent strikes [6].

As stated previously, downward lightning flashes are classified into four types according to the development direction and the polarity of the preliminary discharge (stepped leader). Figure 5 shows a representation a cloud-to-earth lightning discharge process and the associated earth-surface current.

The preliminary discharge starts by a luminous line, located at a point of the cloud base, that advances rapidly about 50 m towards the earth at a speed of the order of 50,000 km/s. Another line then starts from the same point, follows the previous path, passes the stopping point of the first by an approximately identical distance and disappears in its turn. For a duration of about 50 ms, as indicated in Fig. 5, the process is repeated in this way until the head of the last tracer reaches a few tens of meters (ignition distance), or even a few meters from the earth. The connection is then established with the scents which rise to meet it and there is a line of return from the earth to the cloud: this is the priming phenomenon.

The meeting of the two phenomena constitutes the main discharge, which may be followed by a series of secondary discharges traversing the channel ionized by the first strike. Note that each downward negative lightning flash typically contains three to five strokes.

In the presence of an electric field, the gas molecules set in motion in the direction of the field. Their speed will vary depending on the distribution and strength of the field, as well as other parameters such as pressure, temperature and humidity of the gas. Commonly, the disruptive air discharge mechanisms are (A) the Townsend mechanism and (B) the channel mechanism.

This mechanism concerns uniform field air gaps in the case of weak products “p.a” where “p” is the gas pressure and “a” the distance between electrodes (cloud and earth). In this case the disruption is established when the so-called Townsend autonomous discharge criterion (or Townsend criterion) is fulfilled as follows:

In which, α and 𝛾 are the Townsend coefficients.

The first Townsend coefficient (α) represents the number of free electrons per unit length in the direction of the field generated by shock ionization.

The second Townsend coefficient (𝛾) represents the ratio of the number of electrons released from the cathode by secondary emission to the number of positive ions having bombarded the cathode. 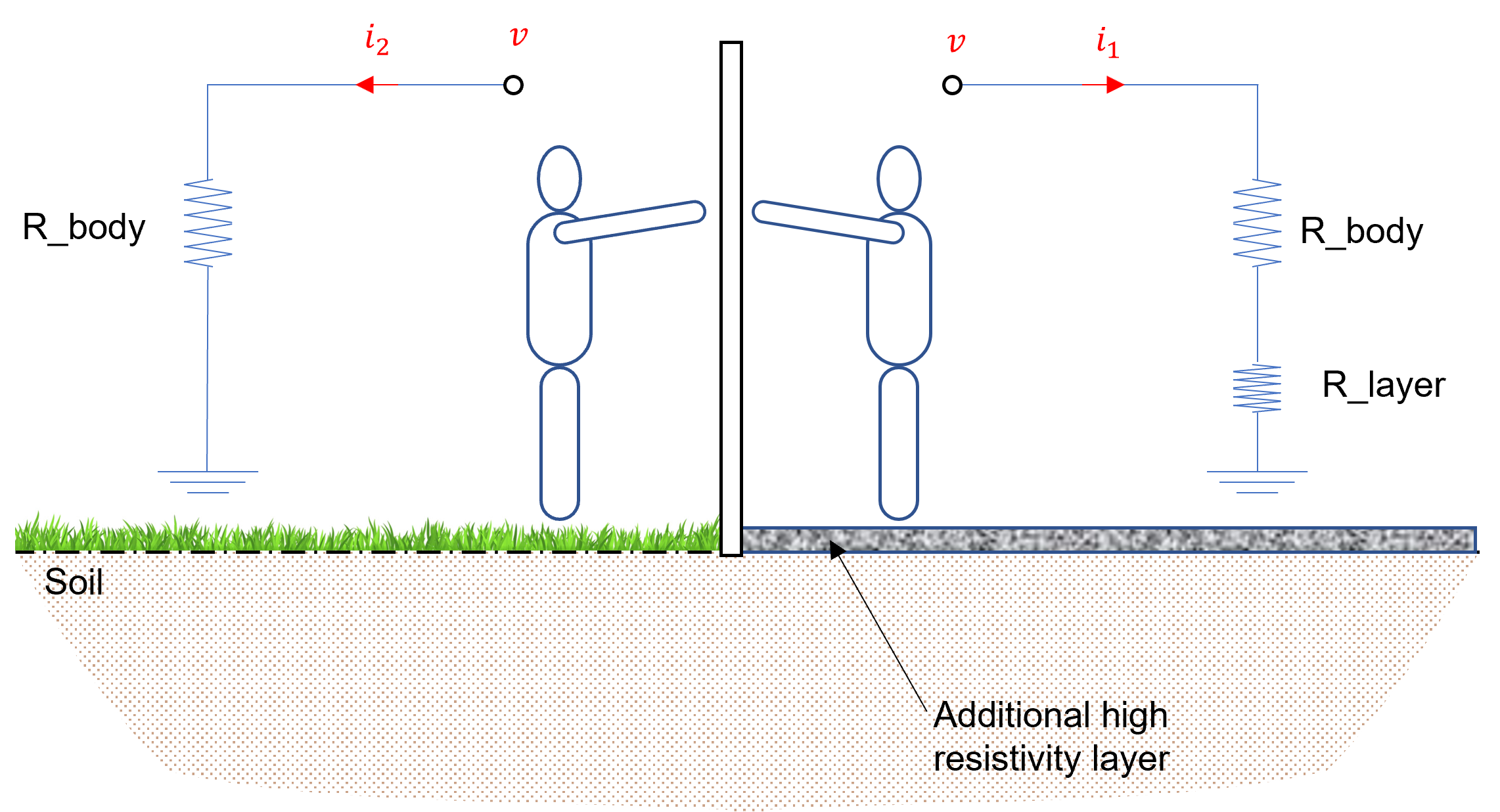 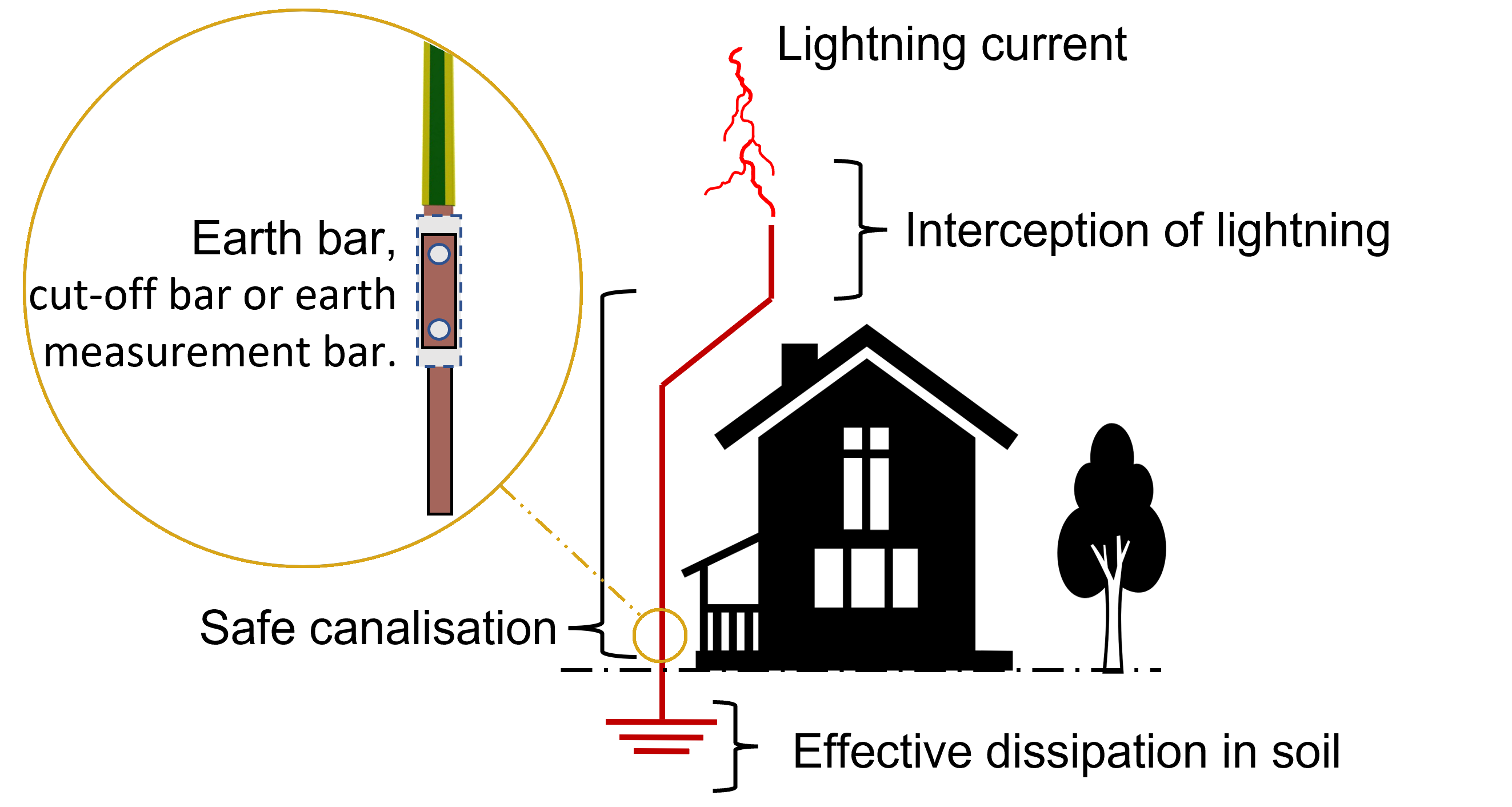 The Importance of an Earth Bar in the Earthing System

Down to Earth keeps you updated and explains all things related to Earthing and Lightning Protection. We care about keeping you and your structures safe, and to do so, we ask our top specialists to share some of their know-how regarding products and installations. We are always ready to get Down to Earth! We’ve got you covered! Make sure to subscribe to our newsletter to keep up with our latest articles and information about lightning protection.